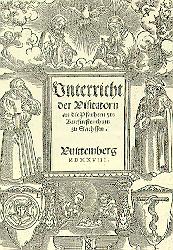 Melanchthon participated in numerous visitations. These resulted in a growing concern with the poor educational system of his time. Melanchthon was not only active in educational reforms in his function as a university professor, but he also wrote numerous textbooks and founded schools and universities. He developed the concept of higher Latin schools, which are precursors of the contemporary German high school (Gymnasien). His suggestions for educational reform were influenced by the humanist ideal of education and Luther's as well as his own Reformation ideas.

Cover of Melanchthon's book
"The Instruction of the Visitors"

The Reformation thus cannot be imagined without Melanchthon. This is also true with respect to the numerous functions he executed during Congresses and the Religious Dialogues of the 1520s-1540s, in which Melanchthon often served as the leading negotiator of the Reformation movement.

Luther thought so highly of Melanchthon that he wanted to appoint him the leader of the Reformation in case he would not return alive from the Congress in Worms, which, in fact, ended in Luther's banishment. Indeed, Melanchthon would take over this function after Luther's death and would remain the not entirely undisputed head of the Reformation until his own death in 1560.