Melanchthon quickly settled down in Wittenberg. This was probably largely due to the fact that he had met Martin Luther there. The always intense relationship between Melanchthon and Luther soon changed from collegiality at Wittenberg University to profound friendship. The following statement by Melanchthon demonstrates just how profound this friendship was. He said:

"I would rather die than be separated from this man."

Luther could soon convince Melanchthon of the worthiness of Reformation. As colleagues at Wittenberg University, friends, and collaborators in the fight for Reformation, their relationship was always characterized by friendly collegiality (Heinz Scheible).

"I have passed on the collaborative teachings to the evangelical communities, and I profess that in this I have followed Luther, with whom I have had many friendly discussions." 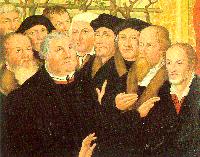 Luther was impressed by the qualities of the young professor. Melanchthon continued his studies of theology in Wittenberg and received an academic degree in this subject. He gave numerous lectures on biblical subjects and was often consulted as an expert on theological issues. Luther introduced Melanchthon to reformed theology, whereas Melanchthon taught Luther the Greek language. It was Melanchthon who motivated Luther to translate the Bible into a German that would be intelligible to the common people. Luther began this project in 1521/22 at the Wartburg. After his return to Wittenberg in the spring of 1522, he polished this translation with many hours of arduous work and predominantly with Melanchthon's help. The result of this work is still available today in the form of the most widely read German Bible translation.

Melanchthon's part in the process of theologically defining the Reformation movement thus cannot be reduced to his "Loci communes" of 1521, the first reformed dogmatics, and the development of the confession of Augsburg in 1530.

"This little Greek even surpasses me in theology."

Melanchthon was already present at the first serious dispute between Luther and the Catholic church, the Disputation at Leipzig in 1519. During the argument with Johannes Eck (also German for "corner"), an astute theologian of the Pope, Melanchthon wrote little notes to Luther that cite biblical passages contradicting the preeminent position of the Pope--the contentious issue of the argument. Because of Melanchthon's help, Eck was driven into a corner and the argument with Luther ended in a tie.

"In my teaching profession I do not respect anything more than Phillipp's advice. This man's judgement and his authority are worth more to me than all dirty Ecks ("all dirty corners")." 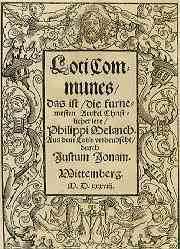 Luther, the prophet among the Reformers, worked tirelessly on his new theology, but he lacked a systemized approach. In 1521 Melanchthon took over this task, writing the first valid summary of reformed theology, the "Loci Communes." Luther felt so enthusiastic about this book that he even wanted to include it in the Bible.

During the Congress of Augsburg in 1530 Melanchthon championed the cause of Reformation, since Luther was unable to leave Electoral Saxony (Kursachsen) due to a ban against him. Melanchthon mastered the difficulties of negotiating with the Catholic side well, although some of his contemporaries criticized him for his sometime overeagerness to find a compromise. Luther, however, was satisfied with the results of the negotiations and did not criticize any of Melanchthon's decisions.
Based on several already completed writings and on the negotiations of Augsburg, Melanchthon wrote the first great confession (confessio) of the Reformation. This work is called the "Augsburg confession" (Confessio Augustana) after the place where it was presented to the German Emperor. Evangelical priests to this day are ordained with this confession.

After Luther's death, Melanchthon became the spokesman of the Reformation. Soon he recognized what this actually meant:

"After Luther was called away from this mortal life, I have now besides pain even more work and worries."

Even though his position was not entirely undisputed, Melanchthon nevertheless remained an outstanding spokesmen of the German Reformation until his own death. Copyright © KDG Wittenberg     Impressum     Datenschutzerklärung