In 1518 Elector Frederick the Wise called Phillipp Melanchthon to Wittenberg University, which had been founded in 1502. The originally scholastic profile of the university with its restricted educational ideal had already been reformed. Thus, Wittenberg University soon offered lectures about humanist authors, thanks to the friend of humanists, Frederick the Wise. As early as 1548 the faculty of arts, consisting of the classical subjects of antiquity such as grammar, rhetoric, dialectic, arithmetic, geometry, astronomy, and music, received a few new chairs, among those one of Greek. Such a chair had hitherto only existed in Leipzig. 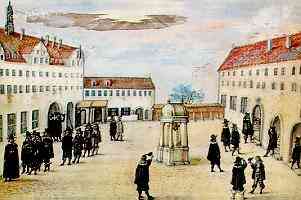 Melanchthon was appointed chair of Greek literature with the best recommendations of his fatherly friend, the humanist Johannes Reuchlin. Melanchthon came to Wittenberg on August 24, 1518 with a fully formulated program for an extended educational reform. He introduced this concept only a few days later during his inaugural speech at Wittenberg University. On August 31, 1518, only three days after the 21-year old Melanchthon gave his speech, Luther wrote to his friend Spalatin:

"Phillippus gave a learned and adorned speech on the fourth day after his arrival and received so much applause and admiration from everyone that you should not think any further of praising him to us. We soon saw past his shape and his appearance; we are happy about his gifts and wonder much, and we thank the most Serene Prince and you for your services in this matter. ... I do not ask for another master of Greek as long as he will be with us. The only thing I am afraid of is that his frail constitution might not be able to endure the way of life in our region."