"Whatever brings the whole of mankind a greater use than science? Not arts, not business, not even the fruits of the earth itself, not even the sun that many believe is the creator of life is more necessary than science." 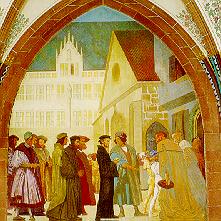 This is a typical quotation by the Wittenberg University Professor Phillipp Melanchthon. For him, science was the key to understanding the world and its order and the key to the understanding of God. Even as a youth Melanchthon devoted himself to science during his university studies. He was greatly influenced by humanism. The famous Erasmus of Rotterdam recognized Melanchthon's many talents early on. In 1516 Erasmus wrote:


"To what hopes does this young man or rather this boy, give rise! What acumen of innovation, what purity of language, what mature erudition!"

Melanchthon had internalized the humanist ideal of mastery of languages early on. Regarding classical languages, his textbook "About Greek Grammar" (1518) was especially important. It was used in many schools well into the 18th century.

"If we do not thoroughly learn certain rules of language expression, we will not be able to articulate our own thoughts nor understand writings from the past."

Primarily because of Melanchthon, Wittenberg University achieved world fame which lasted until the middle of the 17th century. At times more than 2000 students attended his lectures and seminars, thus far surpassing Luther's record. Founding schools, developing new textbooks and pedagogical concepts (for example in his inaugurual speech at Wittenberg University in 1518), and producing numerous works on pedagogy brought great fame to Melanchthon. He was awarded the honorary title of "Praeceptor Germaniae" (Teacher of Germany) during his lifetime. The impact of his pedagogical writings and activities extended far beyond the borders of Germany. Effects in Scandinavian countries and Eastern Europe, for example, can often be documented.
Melanchthon as Praeceptor Europae?


Employing his pedagogical skills, Melanchthon systematized Reformation thought in the form of the "Loci Communes." He is the father of evangelical education in schools and universities. The church inspections, which were decisively influenced by Melanchthon and often implemented by him, revealed the embarassing ignorance of the people as well as the clergy. Melanchthon understood the necessity to give schools, universities, and churches a durable organizational structure and a clear content as one of the most urgent tasks of the Reformation movement. His work "The Instruction of the Inspectors", dated from 1528, documents this belief.

Melanchthon was often the main negotiator during Congresses and disputations, and he took over the leadership after Luther's death. During the years when the Reformation movement increasingly split into various, theologically separate camps, Melanchthon was often treated with hostility, but his position as the head of the Reformation after Luther's death was never seriously questioned.

Yet he always remained a pedagogue, educator, and professor; in fact, he saw his main task in teaching. To teach people the righteous Truth meant for him to lead them down the path of God and to themselves.

"To neglect the youth in the schools means nothing else than to take away the season of spring. Those who let schools fall into decay truly take the season of spring away because without schools religion cannot be maintained. Horrible darkness will be the consequence in all of bourgeois society if the study of science is neglected."

Melanchthon never overcame the contradictions between his humanist education on the one hand and his enthusiasm for Reformation thought on the other. This tension represented the possibility that he would be misunderstood by others, but also prevented him from losing sight of essentials.

"I am completely convinced that whoever wants to engage in spiritual or secular undertakings can achieve very little if he has not previously trained his mind sufficiently in the humanist sciences."