In mid-August of 1557 Melanchthon travelled to the Religious Dialogues of Worms on the order of Elector August. On October 27, 1557 Melanchthon was informed about the death of his wife (who died on October 13, 1557), but he had to remain in Worms until the middle of December 1557. 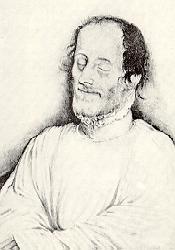 Phillipp Melanchthon on his death bed
Painted by Lucas Cranch d.J. 1560
on the day after his death

Over time, Melanchthon had become an old and sickly man, treated with hostility by many. Since the death of his wife Melanchthon's health increasingly worsened.
In 1560 he caught a cold and fell sick with malignant malaria.

On April 11 Melanchthon gave his last public speech in the big auditorium of the Augustinian Cloisters.
He who had never been afraid of death, died on April 19, 1560 at the age of 63.

"Here rests the body of the most commendable Phillipp Melanchthon, who died on April 19, 1560 in this town after he had lived for 63 years 2 months and 2 days."