When Elector Frederick the Wise of Saxony was trying to fill the newly created position of chair of Greek Literature at Wittenberg University (which he founded in 1502), the 21-year old Melanchthon was recommended to him by the humanist Johannes Reuchlin.
On August 28, 1518 Melanchthon gave his inspiring inaugural speech entitled "Reforming the Instruction of the Youth." He studied theology under Luther, and as early as September 19, 1519 he obtained his first degree in theology (baccalaureus biblicus).

Wittenberg: View of the town from the south, after 1556, Cranach-Studio

"I thank my good Phillip for teaching us Greek. I am older than he. But this does not prevent me from learning from him. I say frankly that he understands more than I, which I am not ashamed of. Therefore, I think much of the young man and will not hear a word against him."

This sealed the friendship between Luther and Melanchthon who was 14 years his junior. The friendship lasted until Luther's death.
From 1519 until his death Melanchthon devoted himself to studying the Gospel as well as reformed theology. At the disputation in Leipzig he would whisper helpful advice into Luther's ear, so that Dr. Eck is said to have angrily exclaimed once:

"Keep quiet Phillip, concern yourself with your studies, and do not disturb me."

Regarding Melanchthon, who based his studies increasingly on the Holy Scriptures, even Luther had to admit:

"This little Greek also surpasses me in theology."

To keep the young Melanchthon in Wittenberg, he was advised to get married. Melanchthon reacted thus:

"I am asked to get married because it is thought to be an improvement of my situation. If I knew that marriage would not disturb my work and my writing, I could easily decide in favor of it. For the time being, however, it will not happen."

Melanchthon's conviction about marriage did not persist for long, however, because as early as November 25, 1520 he got married to Katharina Krapp, the daughter of the mayor of Wittenberg Hieronymous Krapp. 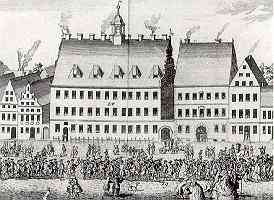 When Luther was taken to the Wartburg for security reasons, Melanchthon took over his lectures on the Biblical Scriptures at Wittenberg University.
As a consequence of the educational reform in 1525 by the new Elector John the Steadfast, Melanchthon was realeased from his professorship and could now hold lectures on any topic he wished.
Based on his lectures about the ethical and political writings of Aristotle and Ciceros which appeared between 1529 and 1532, Melanchthon began publishing his own system of ethics in 1538 and its revised version in 1550. In 1540 Melanchthon published the first part of his teachings on man (De anima, final version 1553) and only a little later, in 1549, his work on physics, in which he also expressed his opinions about Kopernikus's recently published view of the world. Besides a great number of his own works, Melanchthon also commented on New Testament writings. In 1527 he published a commentary on Colossians, and between 1529 and 1556 on Romans (brief introduction in 1520, first completed commentary in 1532, substituted by revised editions in 1540 and 1556).
Melanchthon also became involved in the administration of Wittenberg University. In 1523/24 and 1538 he held the office of the Rector. In 1535/36 and between 1546 and 1548, he served as Dean of the Philosophical Faculty.
Beginning in 1555 Melanchthon gave lectures in world history at Wittenberg University. The resulting work was, however, published under the name of the Berlin Court Astrologer Johann Carion. Copyright © KDG Wittenberg     Impressum     Datenschutzerklärung