Phillipp was prepared for the Latin School in Pforzheim by his private tutor Johannes Unger. In his class he was by far the best student. He was given the opportunity to learn Greek by the rector Georg Simler and the instructor Johannes Hiltebrant.
On March 15, 1509 the humanist Johannes Reuchlin conferred upon him the humanist name "Melanchthon." Reuchlin is said to have told Melanchthon:

"Your name is Schwarzerdt [German for "black soil"], you are a Greek, and so your new name shall be Greek. Thus I will call you Melanchthon, which means black soil [in Greek]." 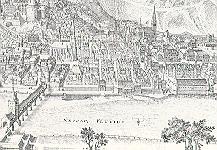 When Melanchthon wanted to take his master's exams in 1512, his professors refused to admit him since they did not believe that the frail fifteen-year old could already represent the authority of an academic teacher.
After continuing his studies in Tübingen, Melanchthon was eventually permitted in January 1514 to take the master's exam at the age of seventeen at the Philosphical Faculty. Afterwards, Melanchthon began his intensive teaching career at the university. During this time, he wrote his first important works which were influenced by humanist ideas. Copyright © KDG Wittenberg     Impressum     Datenschutzerklärung